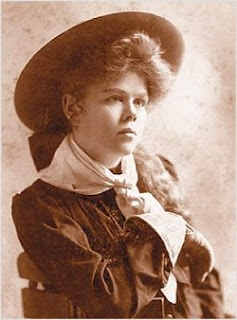 Equally skilled with rifle, lariat and horse, a teenager from Oklahoma named Lucille Mulhall became America’s first cowgirl. Will Rogers wrote that Lucille's achievement in competition with cowboys was the 'direct start of what has since come to be known as the Cowgirl'. He continued to write, “there was no such a word up to then as Cowgirl”. It was coined to describe her after she beat dozens of cowboys in a 1904 cattle-roping competition that set world records.

Lucille Mulhall was born on October 21, 1885, in St. Louis, Missouri to Colonel Zack and Agnes Mulhall. Native American tribes still roamed the open grassland of the Mulhall Ranch when Lucille was growing up. Wolves prowled the prairie, preying on the Mulhall livestock. Cowhands were a vital part of ranching; roping, branding, round-ups and shooting were practical skills instead of pastimes. The little blonde girl with blue-gray eyes was an eager student for the ranch hands and cowboys who lived in the bunkhouses of the Mulhall spread. Lucille, instead of learning piano or sewing like her sisters, learned to toss a lariat and tie a steer. Lucille learned her horsemanship and skills from the Cowboys who rode the cattle drives of the Old West. 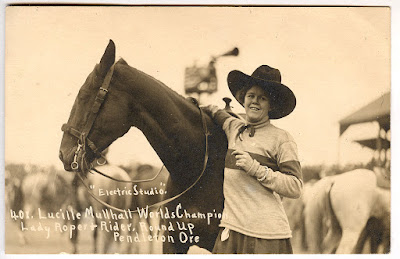 Lucille Mulhall was a cowgirl long before she entertained crowds with feats of horsemanship on Governor, her trained horse. By the age of 7, she was riding around her father’s 80,000-acre ranch. Cowboys who rode the plains of the Indian Territories tutored her in the art of lassoing. Zack Mulhall claimed that when his daughter was 13, he told her she could keep as many of his steers as she could rope in one day. Lucille, he bragged, didn’t quit until she lassoed more than 300 cattle! "By the age of fourteen,” the New York Times reported, "She could break a bronco and shoot a coyote at 500 yards.” Teddy Roosevelt was among Lucille’s fans. While campaigning in Oklahoma as a vice presidential candidate in 1900, Roosevelt first saw the blonde teenager perform. It was the Fourth of July, and Lucille roped in front of a crowd of 25,000 people at a "Cowboy Tournament.” The Daily Oklahoman reported, "Roosevelt was most enchanted with the daring feats of Lucille Mulhall.” "She rode beautifully throughout the contest and lassoed the wildest steer in the field.”

Teddy Roosevelt was so dazzled by the 14-year-old’s skills that he invited the Mulhalls to join him and a select group of Rough Rider veterans at a private dinner. That night Lucille gave the hero of the charge up San Juan Hill the silk scarf she had worn during the Cowboy Tournament. 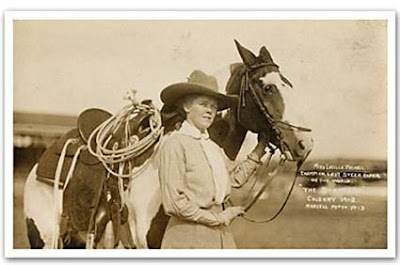 When Zack Mulhall reciprocated the dinner invitation by asking Roosevelt to stay at his ranch, Teddy readily accepted. After watching Lucille’s daredevil antics on the ranch, Roosevelt encouraged her father to get her more exposure. "Zack, before the girl dies or gets married or cuts up some other caper,” Roosevelt reportedly said, "you ought to put her on the stage and let the world see what she can do.” During that same visit, Roosevelt spent time in the saddle riding alongside Lucille. He saw a gray wolf at a distance, which whetted his appetite for the hunt. The wolf eluded Roosevelt that day, but it didn’t escape Lucille. After Roosevelt left, she hunted down the predator. By one account, she dispatched it with a shot from her Winchester, but in another version she lassoed the creature and clubbed it to death. The pelt was sent to Roosevelt, who displayed it in the White House after he and McKinley won the presidential election that fall. Roosevelt later gave Lucille a saddle and an 1873 Winchester .44-40 that had been presented to him.

Lucille Mulhall, was the first well known cowgirl. She competed with 'real' cowboys - the range hardened cowboys accustomed to riding for days in the saddle; the cowboys who spent many hours branding cattle. Her expert roping skills were a natural talent honed by the skills of another natural roper - Will Rogers. She not only was an expert at using the lariat but she had a natural gift of working with horses. She trained horses to respond to the roping of a steer as well as how to perform a number of what she called 'tricks.' Her trained horses she called 'high schooled horses' and one was particularly famous: "Governor." She claimed her horse, Governor, knew at least forty tricks. He could pull off a man's coat and put it on again, could walk upstairs and down again, a difficult feat. He could sit with his forelegs crossed, could lie down and do just about everything but talk. 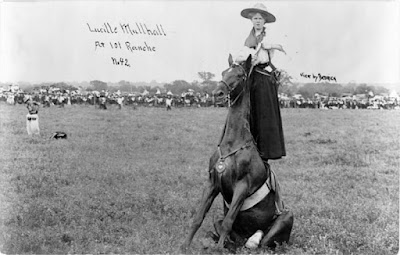 In 1904 Lucille competed against the best cowhands from across the Southwest in a roping contest at Dennison, Texas. In this competition she won a belt buckle, declaring her to be the World's Champion Lady Roper. She won three solid gold medals in Texas for steer roping, a trophy for winning a Cutting Horse contest as well as many other medals, trophies and honors. At the turn of the twentieth century Lucille Mulhall was American's greatest cowgirl.

While still in her early teens, Lucille was the top cowboy performer in the West. Extremely feminine, soft-spoken, and well educated, she seemed a paradox, for she was so steel-muscled she could beat strong and talented men at their own games. She could have been a society belle, but she loved the rough, dangerous life of a cowboy. Had she been a man, she would have been content to work on a ranch, but as a woman she was a novelty and the only way she could make use of her singular talents was in show business. The term cowgirl was invented to describe her when she took the East by storm in her first appearance at Madison Square Garden (in 1905). "Against these bronzed and war-scarred veterans of the plains, a delicately featured blonde girl appeared,” a 1905 New York Times profile intoned. "Slight of figure, refined and neat in appearance, attired in a becoming riding habit for hard riding, wearing a picturesque Mexican sombrero and holding in one hand a lariat of the finest cowhide, Lucille Mulhall comes forward to show what an eighteen-year-old girl can do in roping steers.” 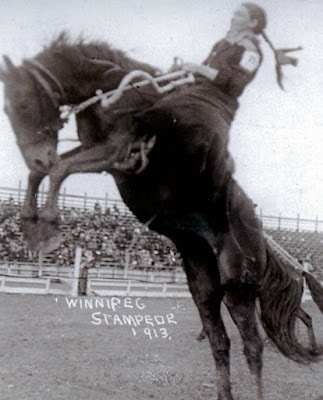 In 3 minutes and 36 seconds, she lassoed and tied three steers. "The veteran cowboys did their best to beat it,” the New York Times reported, "but their best was several seconds slower than the girl’s record-breaking time. The cowboys and plainsmen who were gathered in large numbers to witness the contest broke into tremendous applause when the championship gold medal was awarded to the slight, pale-faced girl, and from that day to this Miss Mulhall has been known far and wide throughout the West as the Queen of the Range.”

Lucille had set a new world record. She won a gold medal and a $10,000 prize. Just as she had dazzled Teddy Roosevelt, Lucille now entranced journalists. Newspapers showered her with titles like "Daring Beauty of the Plains” and "Deadshot Girl,” but the one that stuck was "Original Cowgirl.”

Lucille’s career took her to Europe, where she performed for heads of state and royalty. She officially retired in 1917 at age 32. Live Wild West performances were being eclipsed by the rise of Hollywood westerns. Ironically, many of the stars of silent movies, including "King of the Cowboys” Tom Mix, got their start in Zack Mulhall’s Congress of Rough Riders. But as late as the 1930s, Lucille still did exhibition riding on the Mulhall Ranch. 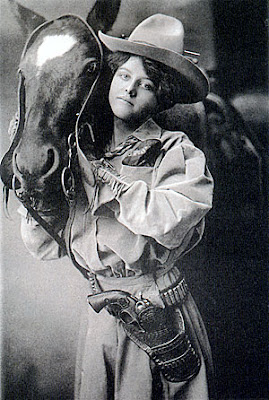 Throughout her life, Lucille remained captivated by show business and more loyal to her father than to any other man. Her two marriages ended in divorce, and she rarely saw her son, born in 1909, because she was always on tour. Though Lucille was a top draw at Wild West shows and had run her own company, "Lucille Mulhall's Round-up," many people considered her an ineffective wife and mother because she had never learned to do "woman's work."

Although Wild West shows became less popular and less financially viable starting in the mid 1910s, Lucille and her brother Charley continued to perform in them through the 1930s. Show attendance dwindled, as did the number of performers. Despite the lack of publicity being given to wild west shows in the shadow of the polio epidemic, the United States' entry into World War I, and then the Great Depression, Lucille seemed unable to pull herself away from the limelight. She made her last known public appearance in September of 1940.

Lucille went back to work at her families ranch, which was located fourteen miles north of Guthrie, Oklahoma, on highway 77. The Mulhall ranch at one time encompassed 80,000 acres of land, much of which was unclaimed land. In addition some land was leased. The original ranch began with 160 acres claimed at the 1889 Oklahoma Land Opening. The Mulhall family operated their show and cattle business from this ranch and had many visitors. Some of their famous visitors were President Theodore Roosevelt, Will Rogers, Tom Mix and even the outlaw Henry Starr. Geronimo also was an admirer of Lucille's talent and gave her a beaded vest and a decorated Indian bow.

Lucille Mulhall died less than a mile from the Mulhall Ranch in an automobile accident on December 21, 1940. She was only 55 years old. In December 1975, she was posthumously inducted into the National Rodeo Hall of Fame.

Our family has been dedicated for 30 years in serving the
Western Horseman the safest most durable
Quality American made leather horse tack....... Buckaroo John Brand Buckaroo Leather, The Brand to Demand
Visit Our Unique Store Today
Buckaroo Leather Shopping Site
Posted by Unknown at 10:36 AM