I just read, Farah DeJohnette's new article from her Blogazine. Farah is a skilled horse trainer and her new article gives great insight to why she uses bitless leather bridles. Also, visit her website and follow her on facebook!

my journey through Horsemanship and Training, I have come to look for better ways to communicate with my horse with equipment and without. The more skilled I have become the less reliant on equipment I have become. 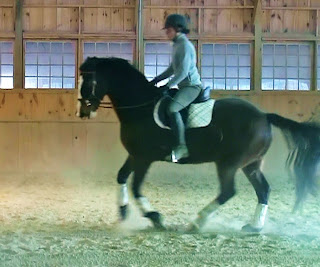 I always used what I'd call "cheap" western Side Pulls from time to time in my training in the past but wasn't into them enough to convert completely. I hadn't found one that compared with my fine english bridle quality. I also was able to ride in halters, leather and rope, but found them a bit sloppy and imprecise for more than a fun hack around some slightly higher level work. Mechanical Hackamores were to me as aggressive if not more then some bits with bicycle chain and wire wrapped with leather in some designs.

When I found the Buckaroo Leather Side Pull and then went on to design the Padded version with John Brand, I had no idea this bridle would become my go to training piece of equipment until I had it in my hand and kept going back to no matter what type of horse I was riding.
I use it on soft horses, heavy strong horses, young horses, jumpers, dressage horses, western horses and more. I don't care if the horse is green or advanced I still use it.

Of course I still use bits because unfortunately, some competitions wont allow you not too, but hopefully that will change soon. I don't feel I need a bit at all though. Give me enough time with a horse and I can get him to ride beautifully in a Side Pull. Let me reiterate "TIME". It took me time to get the heavy pullers riding nicely in the Side Pull but I took that time as opposed to taking the easy way out and going to bigger bits and gadgets. I took the Time to teach them to be more supple, more balanced and strong through proper work and fitness.

Which leads me to another very interesting point. In my conversion of many horses to Bitless for training, I made a discovery about a common problem. Horses opening their mouths during training with the bit. I discovered that mouth opening had more to do will lack of suppleness in the Poll and being on the forehand then it had to do with the bit! How did I find this out? Well while training some known mouth openers with bits, Once I switched them to bitless guess what? When they were resistant, or unbalanced or both, They opened their mouth with NO BIT. When they were stiff in their body and poll, They opened their mouth regardless of whether they had the bit or not.

What does this mean? To me it means that the Poll and jaw are connected (not a new discovery in training) but why are we working on the jaw when the problem is originating in the Poll and body?

Our family has been dedicated for 30 years in serving
the Western Horseman the safest most durable Quality
American made leather horse tack.......Buckaroo John Brand
Buckaroo Leather, The Brand to Demand
Visit Our Unique Store Today
Buckaroo Leather Shopping Site
Posted by Unknown at 7:35 AM No comments:

Buckaroo Leathers' Dog Days of Summer Sale!!!!!
All you cowboys and cowgirls-it is the BIG SUMMER SAVINGS EVENT at Buckaroo Leather! Save 10% on everything! Now is the time to get that new pair of leather roping reins, headstall, bridles, or a new hackamore. Whatever your western horse tack needs- receive 10% off. And better yet all your quality leather horse tack will ship free!!! (see restrictions below)

Hurry and save with the Dog Days of Summer Sale on all your American Made Western Horse Tack from Buckaroo Leather!


Our family has been dedicated for 30 years in serving
the Western Horseman the safest most durable Quality
American made leather horse tack.......Buckaroo John Brand
Buckaroo Leather, The Brand to Demand
Visit Our Unique Store Today
Buckaroo Leather Shopping Site
Posted by Unknown at 12:22 PM 1 comment:

What Makes a Leather High Quality

Quality American Made Tack will last and in the long run will be cost effective!

Buckaroo Leather is proud to be a local, family operating business for over 30 years. We pride ourselves on our quality product, craftsmanship, and customer service provided by our loyal employees. We manufacture our own leather horse tack in our shop located in California. The leather we use is the finest from Hermann Oak Leather, which is tanned here in the United States. All these factors combine to create a quality leather horse product you can count on for years to come.

Our family has been dedicated for 30 years in serving
the Western Horseman the safest most durable Quality
American made leather horse tack.......Buckaroo John Brand
Buckaroo Leather, The Brand to Demand
Visit Our Unique Store Today
Buckaroo Leather Shopping Site
Posted by Unknown at 9:19 AM 1 comment:

Seth Bullock
Seth Bullock was born at Sandwich, Ontario, Canada on July 24, 1847 and came to the United States about 1867-8, locating at Helena, Montana. According to various census records, his father George, a retired British Major living in Canada. His mother was Agnes Fi 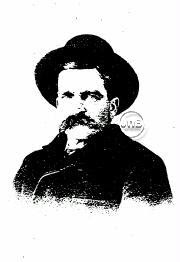 ndley who was born in Scotland.

In the 1870 U.S. Census the then 22-year-old Seth Bullock was living with a grocer and his family in Helena, Montana. Seth's occupation was listed as "auctioneer." Seth was quickly chosen a member of the Montana legislature, after moving to that state. The Seventh & Eighth Sessions of the Montana legislature, held at the capital city of Virginia, from December 4, 1871 to May 8, 1873 under Benjamin F. Potts, governor, notes among the Members of the Council: "Seth Bullock - Lewis and Clark and Jefferson counties."

Seth Bullock married Martha [Marguerite] Eccles in 1874 in Salt Lake City. She was born about 1849 in Ohio, with her parents being both born in Pennsylvania. In 1876 Seth took his wife and children to Michigan, where they stayed while he traveled to Deadwood to set up a business.Seth and Martha Bullock had three children: Margaret ("Madge"), born about 1876 in Montana; Florence ("Floy"), b. October 3, 1878 in Tecumseh, Michigan; and Stanley, born October 1, 1880 in Lawrence Co., SD .

Seth was engaged in hardware and mining supplies business. After the gold discovery in the Black Hills, with his partner, Sol Star, he moved his stock to Deadwood, arriving there August 2, 1876. In 1880 Seth, his wife Martha, and two daughters, "Madge" and "Floy," were living in Deadwood, South Dakota. Seth was a hardware merchant at this time. 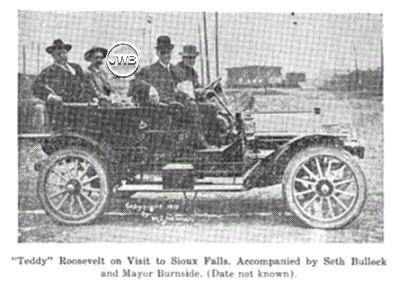 Seth Bullock was made sheriff of the provisional government in what is now known as South Dakota. He was also sheriff of Lawrence County after its organization and rendered effective service in clearing out the rough element. When Theodore Roosevelt was ranching in North Dakota [Theodore Roosevelt was a Deputy Sheriff from Medora, North Dakota around that time] they formed a close friendship, which lasted through life.

As President of the United States, Roosevelt appointed Bullock U.S. Marshall for South Dakota. Captain Bullock promoted and built the fine monument to Roosevelt that stands upon Mount Roosevelt, a few miles north of Deadwood.

In South Dakota there are two men who claimed the distinction of having introduced alfalfa into the state, namely Seth Bullock of the Black Hills region in the western part of the state and W.W. Bell of Valley Springs, in Minnehaha County. It is claimed that Bullock introduced it in 1881, while Mr. Bell claimed to have introduced it from Stockton, California in 1879.

In 1888, Seth Bullock of Lawrence Co. was a member of the Republic Central Committee in South Dakota.

Seth was a Spanish American War Veteran, who served starting about 1898. In 1920 his widow, Martha, applied for his pension. He was a captain in the 3rd Regiment of the U.S. Cavalry.

Seth Bullock died September 23, 1919, at his home in Deadwood, South Dakota after an illness of several weeks (of cancer) and is buried in Mount Moriah Cemetery in Lawrence County, South Dakota

Born Oskaloosa, Iowa, July 8, 1845 – died Colorado, 1904) He was a pimp and early entertainment entrepreneur in Deadwood, South Dakota, running the Gem Theater, a notorious brothel, for 22 years, and combining a reputation for brutality with an uncanny instinct for forging political alliances.

Swearengen and his twin brother, Lemuel, were two of ten children of Daniel Swearengen and Keziah (often called Katie) Swearengen of Oskaloosa. Unlike so many of Deadwood's residents who left home at a young age to make their fortunes on the wild frontier, Swearengen remained at home well into his adult years, arriving in Deadwood in May, 1876 with his wife, Nettie Swearengen. 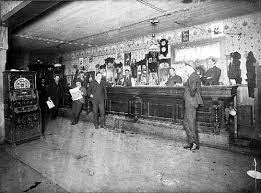 Nettie would later divorce him on the grounds of spousal abuse, and Swearengen would marry two more times, both marriages ending as the first.

Swearengen was one of the first Deadwood residents not to be a prospector or miner; he represented the beginning of a second wave of residents, attracted there by the promise of riches to be stripped not from the earth, but from the prospectors and miners.

He built a small saloon called the Cricket Saloon, which featured as entertainment in its close spaces local miners engaged in what were advertised as "prize fights", although no prizes were actually awarded. Within a year, Swearengen had accumulated enough money to build the much larger and more opulent Gem Variety Theater, which opened on April 7, 1877, featuring the now traditional "prize fights" in addition to stage shows, and, mainly, prostitution.

The Gem bought in an average of $5,000 a night, sometimes as much as $10,000 (between $140,000 and $280,000 inflation adjusted for 2009). When it burned down along with much of the town on September 26, 1879, Swearengen rebuilt it larger and more opulent than ever, to great public acclaim. Swearengen's talent for canny alliances and financial payoffs kept him insulated from the general drive to clean up the town, including the otherwise successful work of Seth Bullock, until the Gem burned down once again in 1899.

He remarried the same year to Odelia Turgeon. It appears that the Methodist church in Deadwood - which also took a moralist crusade to clean up the town - specifically targeted the Gem Theater. According to his recently rediscovered obituary, Albert Swearengen was found dead in the middle of a suburban Denver street on November 15, 1904. He apparently died of a massive head wound and was not hopping a freight train as is often reported.


Our family has been dedicated for 30 years in serving
the Western Horseman the safest most durable Quality
American made leather horse tack.......Buckaroo John Brand
Buckaroo Leather, The Brand to Demand
Visit Our Unique Store Today
Buckaroo Leather Shopping Site
Posted by Unknown at 10:35 AM 1 comment: