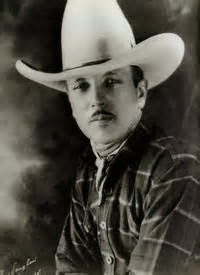 
Eddie Bohlin ran away from home in Orebro, Sweden at age fifteen, hoping to find an apprenticeship as a silversmith. He was unable to find a position and instead worked his way to America on a four-masted schooner, arriving in New York in 1910. As he had been raised with horses, he headed for Montana, where he soon found his first job as a wrangler, rounding up more than nine hundred horses to be sold in Miles City, then the horse trading capital of the world.

For several years Bohlin worked as a cowboy on long cattle drives, both on horseback and as a hand on the freight trains that took cattle to the Chicago stockyards. Bohlin had an aptitude for art, this inspired him to attend the Art Institute in Minneapolis for four months. There he learned the basic concepts that later results in his artistic masterpieces.

Bohlin opened his first silver and saddle shop in Cody, Wyoming, just across the street from Buffalo Bill Cody's Irma Hotel. It was in this shop that he created his first fancy silver-mounted cowboy gear.

While in Billings, Montana, on a buying trip for his shop, an event occurred that changed his life. Billboards around town advertised a vaudeville performance with live horses on the stage, for which he purchased a ticket. Bohlin recognized one of the act's performers from one of his earlier cattle drives and was introduced by him to the show's manager. When Bohlin showed the manger some of his rope tricks that he had picked up along the way, he got hired. The vaudeville act, no matter how small-time, eventually gave Bohlin an unexpected break.

In Los Angeles, while performing at the new Pantages Theatre in 1922, Bohlin heard a loud voice call out from the audience, "Hey kid! What do you want for the coat?" The fellow had spotted Bohlin's coat of black, white and tan calfskin that he had made for himself. "Thirty-five dollars," Bohlin yelled back. When he returned the following night, the coat was gone from his dressing room and in its place was a thirty-five dollar check with Tom Mix's picture and name on it. 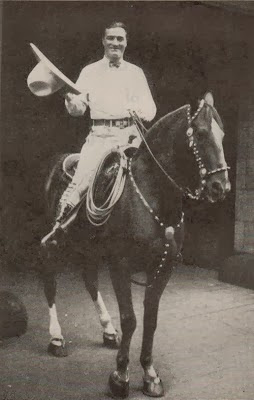 
In those days the cowboy star Tom Mix (1880-1940) was one of Hollywood's most popular actors. Mix asked his friend and business associate, Pat Christman, to invite Bohlin to the studio and to bring some silver and leather goods with him. Tom Mix quickly purchased various items, including the silver decorated boots Bohlin was wearing at the time, for seventy-five dollars. Mix strongly encouraged him to stay on in Hollywood to produce silver and leather items for the studio market.

With this exciting encouragement, Bohlin immediately gave two weeks' notice to the vaudeville troupe's owner and started looking for a place to set up shop. He was fortunate enough to persuade the First Baptist Church in Hollywood to rent him part of their building on the corner of Cahuenga and Selma Avenues. 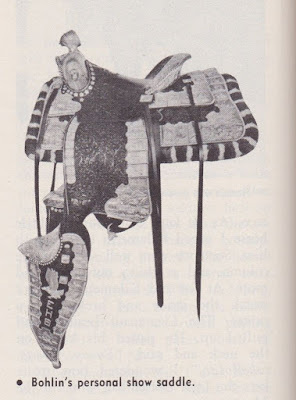 Bohlin's personal show saddle (above) and bridle (below)
both photos from Western Horseman Mag. May 1962 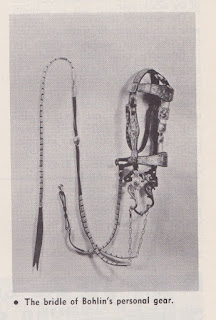 The rapid success of his business soon required him to move the shop to larger quarters. He occupied a series of addresses on Cahuenga and Selma Avenues, and hired many skilled leather workers and silversmiths to augment his own skills and vision.

Tom Mix, his first great customer and friend in Hollywood, was joined by many other film stars, who assured Bohlin of a built-in clientele. This connection with the studios quickly brought him the job of supplying the Egyptian-style chariot harnesses for Cecil B. DeMille's "The Ten Commandments," in 1923, and twenty Roman-style chariot harnesses for MGM's 1925 production of "Ben Hur." Another early studio job was supplying two hundred buckskin suits for Universal's 1923 movie "The Days of Daniel Boone." This order alone came to more than four thousand dollars, a huge sum in those days.


Bohlin's relationship with Tom Mix coincided with the beginning of the era of the super fancy movie cowboy, and his skills were matched by Hollywood's demands for spectacular goods in the Western style. In addition to the early custom work he made for Tom Mix, he produced a richly mounted custom saddle, bridle and breast collar for Buck Jones, and a pair of pistols inlaid with gold and silver for William S. Hart. 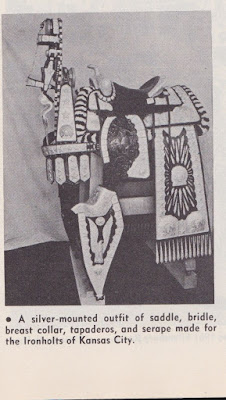 picture from Western Horseman Mag. May 1962

One of Bohlin's custom saddles was owned by two popular and durable Western actors. Ray "Crash" Corrigan (1902-1976) ordered a special saddle and tack from Bohlin in 1938 which he used in about forty movies. Corrigan appeared in dozens of Westerns and starred with John Wayne in twenty-four episodes of the 1930s serial "The Three Mesquiteers." 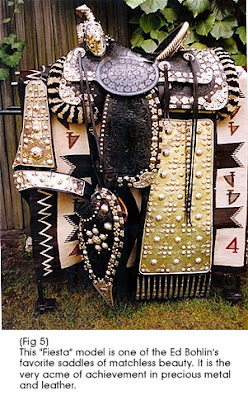 Although the fancy saddles Bohlin designed for cowboy stars provided him with great publicity, his stock designs sold to private horsemen were probably his greatest source of day-to-day income. The most luxurious of these made the movie saddles seem understated by comparison. One of the most spectacular of his stock saddles was the "Fiesta" model. In addition to its elaborately tooled leather, the saddle was heavily mounted with chased and engraved silver openwork plates and conchas, and further adorned with eighteen three-color gold steers' heads with ruby-colored gemstone eyes and other gold ornaments.

Understandably the "Fiesta" model was very expensive. Requiring more than six weeks of work, its list price in the 1941 catalog was $1,255. In 1941 the average cost of a new automobile was $925. (Bohlin's most expensive stock saddle in the 1941 catalog was the "P.K. Wrigley" model. With all of its matching tack, the saddle's list price was $5,750.) 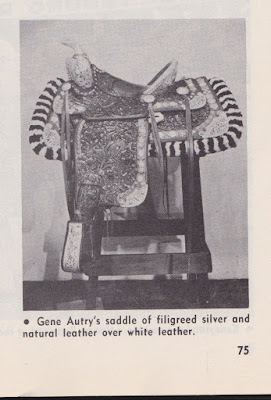 picture from Western Horseman Mag. May 1962

Bohlin also designed and produced nearly ninety percent of the hundreds of silver-mounted parade saddles used in the Tournament of Roses Parade in Pasadena, California. In all, between 1923 and 1980, the Bohlin Shop designed, produced and sold more than twelve thousand saddles, most of which were extensively adorned with sterling silver ornamentation.

Unquestionably the most spectacular and unique example of his artistry was his very own parade saddle, lovingly fabricated with gold and silver over a fourteen-year span and finally completed in 1945. The seventy-pound saddle has gold and silver relief carvings that depict in minute detail scenes of western life and game animals of the Pacific Slope. When completed it was considered the most expensive parade saddle in the world with a value in excess of $125,000. Gene Autry later purchased it for an undisclosed sum. It is now in the collection of the Autry Museum of Western Heritage in Los Angeles.

After more than fifty years in the trade, the old master finally semi-retired in 1972. His longtime employee, Bud Phillips, ran the shop for him. Bohlin later suffered a stroke that left him paralyzed until his death on 28 May 1980. 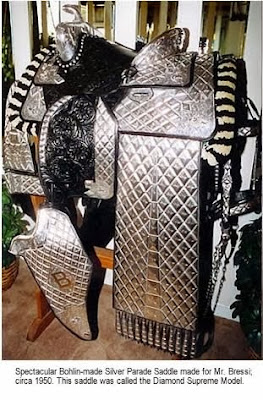 Our family has been dedicated for 30 years in serving the
Western Horseman the safest most durable
Quality American made leather horse tack....... Buckaroo John Brand Buckaroo Leather, The Brand to Demand
Visit Our Unique Store Today
Buckaroo Leather Shopping Site
Posted by Unknown at 7:27 PM