The Circus- Equestrian Entertainment in the Old West

The Circus- we all have been to one, kids love them, they are an iconic part of our culture. As in modern times, Circuses were an important part of the old west culture in the 1800s.

Cowboys coming from the dusty cow trails, frontier men after a long work week and miners who were looking to forget there long hard day in the mine came to town looking for excitement and entertainment.

Circuses provided much needed entertainment for all. The had any manner of acts, including wild animal menageries, clowns, acrobats, trapeze artists, tightrope walkers, brass bands, performing elephants and equestrians who could stand on horseback as they galloped around a center ring.
The circuses date back to Mexican times when shows based on European models came up from the South into California and the southwest around the middle of the 19th century. Circus troupes from the East began to reach settlements in the more accessible regions of Kansas and Nebraska. They traveled in horse drawn wagons over atrocious roads.

By 1880s when railroads had eased the difficulties of transportation, the circus came into its own as the greatest show in the West. 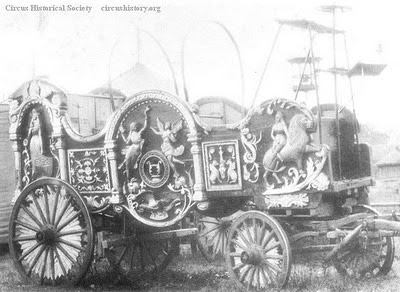 One of those shows was the John Rowe & Co. Pioneer Circus. Here is an excerpt from an article written about the show-

“ by far the most extensive and elegant organized equestrienne establishment that ever appeared in CA…Traveling through the state at an expense of fifteen thousand dollars a month as an added incentive, the seats are carpeted, and attentive and gentlemanly ushers to wait on ladies and family."


The John Rowe & Co. Pioneer Circus was based in San Francisco, Ca and traveled extensively throughout California. As mentioned before, one of the circus acts was the equestrians who could do acrobatics on horseback.

Below is a glimpse into a typical equestrian performance at the Pioneer Circus. 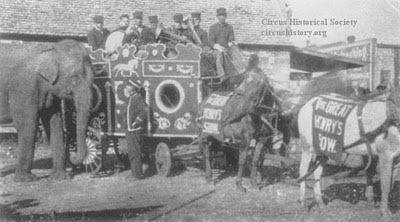 The main acts of the Pioneer Circus were the equestrian events. At show time the audience was treated to all the spectacle and finery the troupe could provide. One of these spectacles was Miss Mary Ann Whittaker, the first female equestrian artist in America. She was ranked among the best in ballet and pantomime. She would ride out into the sawdust-covered ring standing on her milk white horse in pink tights and ruffles with stars and spangles. Then to the amazement of the crowd as she neared a ribbon held in her path 12 feet high by two colorful clowns, she would leap up off the horse and over the ribbon and then land gracefully onto the horses back all while it was speeding around the circus ring. The applause was thunderous and it continued through the evening. Other riders rode in pyramids on two horses with three riders stacked neatly on top of one another while still others did forward and backward flips through rings of fire. 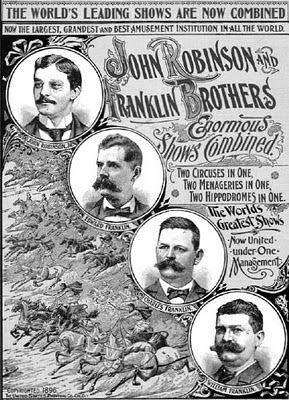 For these amazing acts to work the horses and riders went through hours of rigorous training some of which is not what you would expect. While the horses went through their paces the grooms would carelessly kick cans about the ring, fire guns, and even tie five-gallon cans to the horse's tail! This was all done in training to teach the horse not to sway from its paces for anyone but its trainer. Timing was everything in the ring. An acrobatic rider doing a back somersault would not like it much if he came down from his leap only to find the horse spooked by a child with a firecracker and not be in his appointed spot.

The Circuses not only used their horses for entertainment, but for hauling all the equipment, animals, and performers in wagons. The travel was hard and taxing on all. Between the roads, or lack of, and the weather it made getting from one town to the next very eventful.

Usually the circus would only be able to cover two or three miles in an hour. Many of the stops were 10 to 15 miles apart and a rider would go ahead and mark the forks in the road with a rail so the caravan would go the right way. 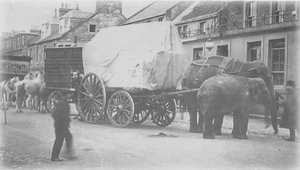 Perhaps the worst occurrence would be after getting little or no sleep,
fighting their way through a drenching rainstorm, pulling out and repairing wagons, and then hearing the word "lost." This of course meant retracing steps and going through all the problems again. 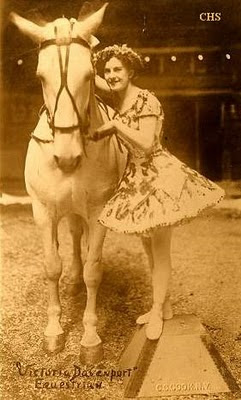 I can just imagine the excitement of the circus coming to these prairie towns and watching the thrilling acts of the equestrian acrobatics.
During these acts I am sure you would see such leather horse tack as the Martingale breast collars, headstalls, and lariat ropes. And of course, I am sure there saddles and horse tack were adorned with silver.

Not unlike the equestrian performers of the old west circuses, many riders today adorn there saddles and leather horse tack with "bling" and silver. Riders today, also like the look of the old west cowboy horse tack, such as the Cowboy Harness Leather Headstall, Old West Bridle, or the Western Roper Breast Collar.