Harvey Girls of the Old West 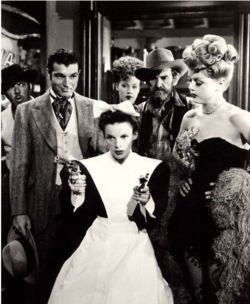 When you think of the Wild West what comes to mind??? Cowboys, gunfights, saloon fights, lawlessness, gunslingers, and Harvey Girls???  And I am not referring to Judy Garland in the 1946 musical, "The Harvey Girls".
A Harvey Girl was a waitress at the Harvey House restaurants in the American old west. These Harvey girls raised the bar on dinning and civilities in a time not necessarily know for either.
If you were traveling west by the railroad your only option for food along the way was at the roadhouses located by the railroads water stops. There you could find a meal of rancid meat, cold beans, and week-old coffee. Not necessarily appetizing. The need for the Harvey Houses was clear. 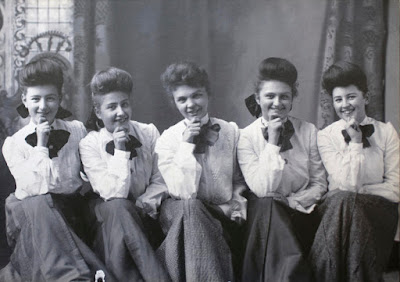 The Harvey House chain of restaurants, hotels, and other hospitality industry businesses were owned by the Fred Harvey Company. The Harvey House's were situated alongside the Atchison, Topeka and Santa Fe Railways. Harvey opened his first depot restaurant in Topeka, Kansas. This first restaurant was so well received by the rail passengers, that the officials of the railroad allowed Harvey to build his eating establishments along the entire route. By the late 1880's, there was a Fred Harvey restaurant located every 100 miles along the Santa Fe line. Fred Harvey is credited with creating the first restaurant chain in the United States.
The success of the Harvey Houses was due to the strict standards for high quality food and first class service, by his Harvey Girls. Harvey was able to serve fresh quality food due to the Santa Fe Railroad agreeing to transport fresh meat and produce free of charge to any Harvey House on the railway line. The meals were not only fresh but were served in large portions on fine china with Irish linens. The prices for these delicious meals were quite reasonable, it has been suggested that the Harvey Houses originated the "blue-plate special". This was a daily low-priced meal served on a blue- patterned china plate. Along with the quality food, the Harvey Houses maintained a high level of custom service. 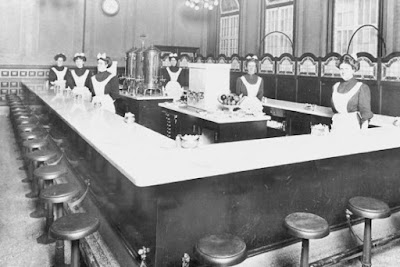 Through a series of signals between the Harvey Houses and the railroad the dinning room staff was able to feed an entire train in just thirty minutes. This dining staff included the waitresses called "Harvey Girls".


The Harvey Girls were comprised of single, white, females that were well mannered, and educated. Harvey placed ads in the newspapers throughout the east coast and Midwest for "white, young women, 18 to 30 years of age, of good character, attractive and intelligent". The Harvey Girls were paid $17.50 a month plus room and board and tips. The recognizable black and white uniform was starched and consisted of a skirt that hung no more than eight inches off the floor. The uniform also consisted of an "Elsie" collar, opaque black stockings, and black shoes. The girls had their hair restrained in a net and tied with a regulation white ribbon. The Harvey Girls were not allowed to wear makeup or chew gum while working. The Harvey Girls strict dress code and conduct followed over to their personal lives. 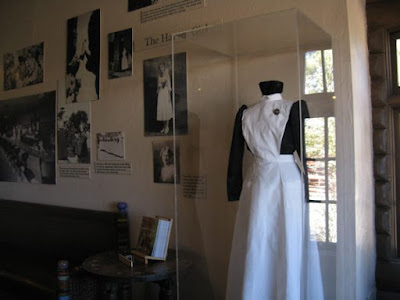 Fred Harvey passed down this strict code of conduct. The Harvey Girls were expected to adhere to this code of conduct 24 hours a day. The girls were told what time to go to bed, whom to date, and even what to wear, including jewelry and makeup. Yet with all these restrictions, by the late 1950's over 100,000 girls had been hired.
The Harvey Houses and their Harvey Girls were a mainstay along the Santa Fe Railway. They brought a little civility and decorum to a harsh Old West.

Our family has been dedicated for 30 years in serving the
Western Horseman the safest most durable
Quality American made leather horse tack....Buckaroo John Brand Buckaroo Leather, The Brand to Demand
Visit Our Unique Store Today
Buckaroo Leather Shopping Site
Posted by Unknown at 7:05 PM