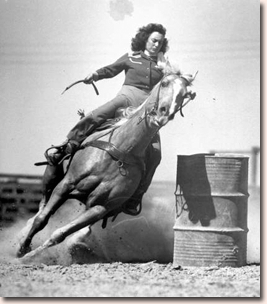 Barrel racing is a rodeo event in which a horse and rider attempt to complete a clover-leaf pattern around preset barrels in the fastest time. (Typically three fifty-five gallon metal or plastic drums) It combines the horse's athletic ability and the horsemanship skills of a rider in order to safely and successfully maneuver a horse through the pattern.

Though both boys and girls compete at the youth level and men compete in some amateur venues, in collegiate and professional ranks, it is primarily a rodeo event for women. In the 1900’s when the women began to compete in the rodeo’s they excelled at horse racing, trick riding and relay. Their weight was an advantage and, due to their gentler nature, the females seemed to have a closer kinship with the horses.

The History
(By Gail Hughbanks Woerner) 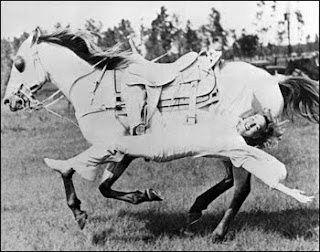 Faye Blackstone (pictured here) began her trick riding career in the 1930s, but when specialty acts began being replaced Faye turned her great horsemanship talents to barrel racing. She and a few other cowgirls began the barrel racing event in Florida in 1950. Dixie Reger Mosley(the last picture on the page) began her rodeo career at age 5 ½ years old, trick riding on a Shetland pony. Growing up in a rodeo family gave her many varied opportunities, including some rodeo clowning. When the Girl’s Rodeo Association (GRA) began in 1948, which turned in to the Women’s Professional Rodeo Association (WPRA) in 1981, Dixie was the bullfighter, rodeo clown, and competed in most events, except bull riding. She saw barrel racing evolve through the GRA organization to become an event for women that today offers purses that compete with the Professional Rodeo Cowboy’s Association (PRCA) event purses.

Barrel racing was first seen in Texas , according to Faye Blackstone, and spread from there. Although women had been competing in rodeo, in various ways, since the 1880s, when Buffalo Bill Cody, hired Annie Oakley (pictured below), the best known woman gun handler of the day. Cody discovered that fans would flock to his wild west shows to see her perform. But the decision to include women bronc riders, relay race riders, and so on, was always at the discretion of the men producing the event. 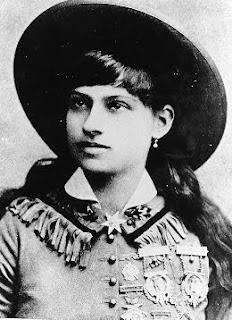 d to add girls, sixteen years and older, that were sponsored by area businesses and represented the community from which they came. The girls would lead the parade, participate in various minor rodeo activities and be available to visit and dance with the cowboys at the social events held each evening. The following year the young ladies were given prizes for (1) the best mount, (2) most attractive riding outfit, and (3) best horsemanship. The horsemanship was demonstrated by riding in a figure eight around barrels. In 1935 the Stamford event changed the barrel racing to a cloverleaf pattern, but it was not judged strictly by the shortest time until 1949.

The Cowboys Amateur Association (CAA) organized in 1940, and held rodeos where the contestant could compete on the amateur level until they had won $500. They could then join the ‘professional’ rodeo organization, should they choose to do so. The CAA held competitions for women, as well as men, which included barrel racing, cutting horse contests, bronc riding and a roping event. They also offered money as prizes instead of feminine gifts, such as make-up cases and hair products, which were the general prizes offered previously.
There was a flurry of “all girl rodeos” during World War II. They were highly successful, but when the war was over and the men came home things went back to the way they had been before the war, that meant few rodeo competitions for women.
Mildred Farris, barrel racing pioneer, whose competitive years spanned the 1950s until 1971, and was a Girl’s Rodeo Association director, vice-president and president from 1965 to 1971, remembers the days when she and others in her era were trying to get barrel racing included at rodeos across the country. “I worked for the rodeo producer, Tommy Steiner, as a rodeo secretary and he always had barrel races at his rodeos. I think that the barrel racing event, in the beginning, often took the place of contract acts, that had been such an important part of rodeos in earlier days. The girls in the barrel racing event, in our day, always wore more colorful, flashy clothes, much like the contract performers. Steiner was the first producer to use the electric eye in timing the barrel racing event. It must have been in the 1960s,” Farris recalled. She also said that in those days the prizes for barrel racing were not comparable to the men’s events. If the men’s bronc riding or roping paid $400 to win, the barrel racing paid around $100 to the winner. She is quite proud to say that in today’s rodeo the WPRA-sanctioned barrel racing events pay comparable monies to the PRCA-sanctioned events, such as bronc riding, roping competitions, etc.

Farris reminisced about her first barrel racing horse. She bought a ‘spoiled’ roping horse. He was ‘high-headed’ and it was impossible to use a tie down on him. But when he started running he would put his head down and he handled well. “The first barrel race I entered with him was an amateur rodeo and I had only run him a few times. At the last minute they decided to change the pattern and run to the first barrel, then to the third barrel, (the farthest away), and back to the second barrel. In spite of the fact he’d not run this pattern before we finished second. That night I practiced this new pattern with him and the second performance we finished first.” Farris was one of the top fifteen barrel racers in the United States for twelve years, 1958 through 1970, only missing 1965. She was also voted Rodeo Secretary of the Year by PRCA nine times, with the most recent honor given to her in 2006. She was inducted, with husband, John, in to the ProRodeo Hall of Fame in 2006.