Most women of the 1800's learned to ride out of necessity from helping on the ranch and practicing the skills of the range. From an early age, women could stay in the saddle, break a bronc and rope a steer.

In the late 1800's, the younger horsewomen began competing against males in a yearly gathering of herds -which progressed into participating in rodeo's.


The first rodeos began in the mid-1800 when thousands of cattle and horses were driven to town for the yearly round-up. The cowboys were eager for relaxation and would compete in tests of skills like roping, breaking horses, branding cattle and racing.

The most famous cowgirl was Phoebe Ann Moses or Annie Oakley (pictured here). 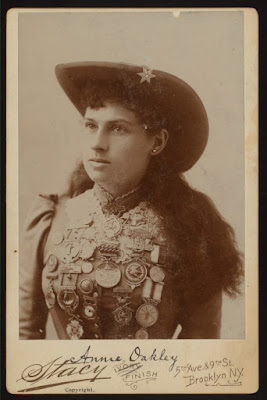 Here are two stories of women who also helped start the movement of women in Rodeo's
(Stories are from the book "Daughters of the West" by Anne Seagraves.) 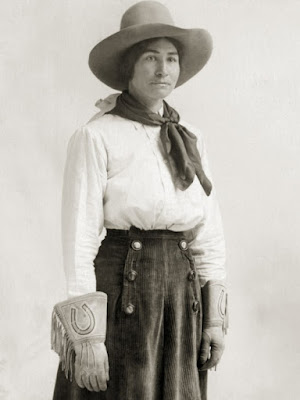 In 1897, Bertha Kaelpernick Blancett (pictured above) rode over 100 miles to enter a horse race in Cheyenne's Frontier Days and she was allowed to enter only because the arena was so muddy the cowboys refused to participate. Bertha was coerced into riding a bucking horse to keep the crowd from leaving. Once upon the animal, the petite girl had the ride of her life. Part of the time the horse was up in the air on his hind feet and once he fell backwards, but gutsy Bertha skillfully slid to his side and hung on. Although it was said at that time, that Bertha was a terrible bucker, she had managed to remain in the saddle, putting the cowboys to shame.

Later in 1904 Bertha became a star performer in Claude William's show and was a four time winner in Roman Racing at Pendleton. Bertha rode under men's rules, was seldom defeated and often beat such cowboys as Ben Corbett and Hoot Gibson.


Four years later Prairie Rose Henderson, an exuberant and talented daughter of a Wyoming rancher, rode to Cheyenne to enter a bronc busting contest. When the lady arrived, she was told, much to her chagrin that women were not permitted to ride. When Rose demanded to see the rules, she found there was no clause forbidding women to compete, and the officials were forced to let her participate. Her entrance into the arena created a sensation. Women had always been spectators, not competitors, and Miss Henderson was a colorful person. She came dashing out of the chute hanging on with all her strength and promptly lost the race. Prairie Rose, however, was really a winner, for she had opened the door to rodeo for other women to follow.


Later, Rose went on to victory in other rodeos and became one of the most flamboyant cowgirls of her era. In 1918, she entered the Gordon Nebraska rodeo wearing ostrich plumes over her bloomers and a blouse covered with bright sequins she had carefully sewn herself.


Rose eventually married a rancher and one cloudy day in 1932, Rose rode off to her last competition. This time, she faced her greatest fear, a storm, and lost her life during a blizzard. Prairie Rose's body was discovered nine years later and identified only by her champion belt buckle.

Most women of the 1800's learned to ride out of necessity from helping on the ranch and practicing the skills of the range..........