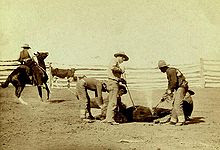 Cattle/Livestock branding is a technique for marking cattle/livestock so as to identify the owner. In English lexicon, the word “brand” originally meant anything hot or burning, such as a firebrand, a burning stick.

The origin of cattle branding dates from 2700 B.C. Paintings in Egyptian tombs document branding oxen with hieroglyphics. Ancient Greeks and Romans marked livestock and slaves with a hot iron.

By the European Middle Ages, branding commonly identified the process of burning a mark into stock animals with thick hides, such as cattle, so as to identify ownership. The practice became particularly widespread in nations with large cattle grazing regions, such as Spain.

No law dictated the exact spot on a cow's hide for the branding, yet through the years the left side of the animal, especially the hip, became the customary

spot. Nowhere in old documents or recollections does anyone say why the left side was chosen, but the recollections of some old-time cowboys suggest that cattle have a peculiar habit of milling more to the left than to the right; hence brands on their left sides would be more visible to cowboys inside the roundup herds. Still other cowboys recalled that cattle were branded on their left hips "because persons read from left to right" and thus read "from the head toward the tail." As one cowboy added, "A right-handed roper would ride slightly to the left of the animal and could see the brand better if it were on that side." Regardless of the reason for the position of a brand on an animal, the position was recorded in brand books.

Brands of this type have a specialized language for "calling" the brand. Some owners prefer to use simple pictures; these brands are “called” using a short description of the picture.

Reading a brand aloud is referred to as “calling the brand“.