The Pinkertons Not Just a Detective Agency 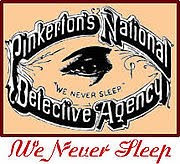 A while back I wrote a blog about the Pinkerton Detective Agency. The Pinkerton Agency was created by Allan Pinkerton (25 August 1819 – 1 July 1884). He was a Scottish American detective and spy. His agency became the first detective agency of the United States.

But the Pinkertons, as they were so famously called, were not just detectives. They were also hired by the railroads to catch the western outlaw. 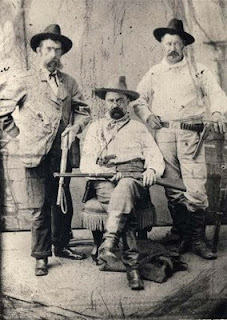 You may remember in the movie "Butch Cassidy and the Sundance Kid"-refer to the Pinkertons in the famous line, "Who are those guys". The Pinkertons are also mentioned in the popular western series "Deadwood", Al Swearengen believes one of the Pinkerton agents is in Deadwood.

The Pinkertons hunted down outlaws and brought them to justice. Jesse James and the James-Younger Gang, Butch Cassidy, Sundance Kid, and the Reno Gang were all sought after by the Pinkertons.

Jesse and his brother Frank James were Confederate guerrillas during the Civil War. They were accused of participating in atrocities committed against Union soldiers. After the war, as members of one gang or another, they robbed banks. They also robbed stagecoaches and trains.

The James brothers were most active with their gang from about 1866 until 1876, when their attempted robbery of a bank in Northfield, Minnesota, resulted in the capture or deaths of several members. They continued in crime for several years, recruiting new members, but were under increasing pressure from law enforcement. On April 3, 1882, Jesse James was killed by Robert Ford, who was a member of the gang living in the James house and who was hoping to collect a state reward on Jam

The Adams Express Company turned to the Pinkerton National Detective Agency in 1874 to stop the James-Younger Gang. Because the James-Younger gang received support by many former Confederates in Missouri, they eluded the Pinkertons. Joseph Whicher, an agent dispatched to infiltrate Zerelda Samuel's farm, shortly afterwards was found killed. Two others, Louis J. Lull and John Boyle, were sent after the Youngers; Lull was killed by two of the Youngers in a roadside gunfight on March 17, 1874, fatally shooting John Younger before he died.

Allan Pinkerton, the agency's founder and leader, took on the case as a personal vendetta. He began to work with former Unionists who lived near the James family farm. On the night of January 25, 1875, he staged a raid on the homestead. Detectives threw an incendiary device into the house; it exploded, killing James's young half-brother Archie and blowing off one of the arms of mother Zerelda Samuel. Afterward, Pinkerton denied that the raid's intent was arson. But biographer Ted Yeatman located a letter by Pinkerton in the Library of Congress in which Pinkerton declared his intention to "burn the house down".


Butch Cassidy and the Sundance Kid-
Harry A. Longabaugh made a huge mistake: he got caught stealing a horse in Sundance, Wyoming and was thrown in jail. He might have lost his innocence, but he gained a name and a place in history. He became known as 'The Sundance Kid'.

He was implicated in 1892 in a train robbery, and again in 1897 in a bank robbery along with five other men. Sundance became associated with a group known as the 'Wild Bunch' which included his famous partner Robert Leroy Parker, a.k.a. Butch Cassidy. By 1900, they held up the Winnemucca National Bank in Nevada and then headed for South America with their proceeds, all the while being pursued by Pinkertons.

Before the Wild Bunch actually made their escape, they made a fatal mistake: they took a picture of themselves. Detectives later used this to help identify them.

Sundance and Butch Cassidy made their way to Argentina where they tried to live the life of peaceful farmers. However, for one reason or another, they turned back to their criminal ways sometime around 1905.

In 1908, they were seen escaping with a mule and money taken from a mining company's payroll in Bolivia. Ironically, the mule was recognized and led to their discovery. They were wounded in a gunfight with lawmen and eventually killed, some say by their own hand as a way to avoid capture and jail. However, their bodies were not physically identified and many still believed them to live after this encounter. In fact, the Pinkertons continued their search for many years.

The Reno Brothers Gang, also known as the Reno Gang, and nicknamed "The Jackson Theives" were a group of Criminals that operated in the Midwestern United States during and just after the American Civil War. Though short-lived, they carried out the first three peacetime train robberies in U.S. history. Most of the stolen money was never recovered.

The gang was broken with the lynchings of ten of its members by vigilante mobs in 1868. The murders created an international diplomatic incident with Canada and Great Britain, a general public uproar, and international newspaper coverage. No one was ever identified or prosecuted for the lynchings.

The Reno Gang was the first "Brotherhood of Outlaws" in the United States. They terrorized the Midwest for several years and inspired the creation of a host of other similar gangs who copied their crimes, leading to several decades of high-profile train robberies. Their gang attracted several new members after the end of the war. They started by robbing and murdering travelers in Jackson County and began to branch out to other counties, where they raided merchants and communities.

They planned to rob their first train near Seymour; the town was an important rail hub at that time. On the evening of October 6, 1866, John Reno, Sim Reno, and Frank Sparkes, boarded an Ohio and Mississippi Railway train as it started to leave the Seymour depot. They broke into the express car, where they restrained the guard and broke open a safe containing approximately $16,000. As the train moved along the tracks, the three men pushed a larger safe over the side, where the rest of the gang was waiting. Unable to open the safe, the gang fled as a large posse approached. 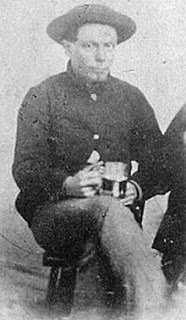 Later, passenger George Kinney stepped forward to identify two of the robbers. The three men were arrested, but were released on bail. When Kinney was shot and killed, the other passengers refused to testify and all charges had to be dropped. The safe they stole would ultimately lead to the downfall of the gang. Its contents were insured by the Adams Express Company, which hired the Pinkerton Detective Agency to track down and capture the gang.

On November 17, 1867, the Daviess County Courthouse in Gallatin, Missouri was robbed. John Reno was identified, arrested by Pinkerton agents, and sentenced to 25 years in the Missouri State Penitentiary in 1868. (He was released in February 1878.) John was the only brother who was not executed.

However, this did not deter the gang. Three robberies in Iowa followed in quick succession, in February and March 1868. Frank Reno and fellow gang members Albert Perkins and Miles Ogle were caught by Pinkertons led by Allan Pinkerton's son William, but broke out of jail on April 1. A second train robbery occurred in December 1867, when two members of the gang robbed another train leaving the Seymour depot. The robbers netted $8,000, which was turned over to the brothers. A third train, owned by the Ohio & Mississippi, was stopped by six members of the gang on July 10, though the Reno brothers were not involved. Waiting in ambush however were ten Pinkerton agents. A shootout ensued; after several of the gang were wounded, the would-be robbers fled. Volney Elliott was captured and gave up information that led to the arrest of Charlie Roseberry and Theodore Clifton.

In March 1868, the residents of Seymour formed a vigilante group with the aim of killing the gang. In response, the gang fled west to Iowa where they robbed the Harrison County treasury of $14,000. The next day, they robbed Mills County treasury of $12,000. The Pinkerton detectives quickly located the men and arrested them at Council Bluffs, Iowa. On April 1, the gang escaped from their Iowa jail and returned to Indiana.

The Reno Gang then robbed its fourth train on May 22. Twelve men boarded a Jeffersonville, Madison and Indianapolis Railroad train as it stopped at the train depot in Marshfield, Indiana, a now defunct community in Scott County,Indiana. As the train pulled away, the gang overpowered the engineer and uncoupled the passenger cars, allowing the engine to speed away. After breaking into the express car and throwing express messenger Thomas Harkins off the train (causing fatal injuries), the gang broke open the safe, netting an estimated $96,000. This robbery gained national attention and was published in many major papers. The Pinkertons pursued, but the gang broke up and fled throughout the Midwest.

The gang attempted to rob another train on July 9. Pinkerton detectives had learned of the plan and ten agents were waiting aboard the train. When the gang broke in, the agents opened fire, wounding two of the gang. Everyone was able to escape except Volney Elliot, who outed the other members of the gang in exchange for leniency. Using the information, the detectives arrested two more members of the gang the next day in Rockport.

All three men were taken by train to jail. However, on July 10, 1868, three miles outside Seymour, Indiana, the prisoners were taken off the train by a group of masked men calling itself the Jackson County Vigilance Committee and hanged by the neck from a nearby tree. Three other gang members, Henry Jerrell, Frank Sparks, and John Moore, were captured shortly after in Illinois and returned to Seymour. In a grisly repeat, they too fell into the hands of vigilantes and were hanged from the same tree. The site became known as Hangman Crossing, Indiana.

On July 27, 1868, the Pinkertons captured William and Simeon Reno in Indianapolis. The men were jailed at the Scott County Jail in Lexington. They were tried and convicted of robbing the Marshfield train, but because of the threat of vigilantes, they were moved to the more secure Floyd County Jail. The day after their removal from Lexington, the vigilantes broke into the vacated jail, hoping to catch and lynch the men. 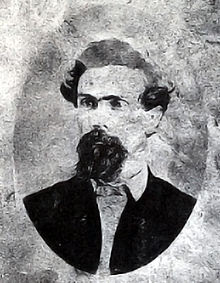 Frank Reno, the gang's leader, and Charlie Anderson were tracked down to a Canadian border town of Windsor, Ontario. With the help of United States Secretary of State William H. Seward, the men were extradited in October under the provisions of the 1842 Webster-Ashburton Treaty. Both men were sent to New Albany to join the other prisoners.

On the night of December 11, about 65 hooded men traveled by train to New Albany. The men marched four abreast from the station to the Floyd County Jail where, just after midnight, the men forced their way into the jail and the sheriff's home. After they beat the sheriff and shot him in the arm for refusing to turn over the keys, his wife surrendered them to the mob. Frank Reno was the first to be dragged from his cell to be lynched. He was followed by brothers William and Simeon. Another gang member, Charlie Anderson, was the fourth and last to be murdered, at around 4:30 a.m on December 12. It was rumored that the vigilantes were part of the group known as the Scarlet Mask Society or Jackson County Vigilance Committee. No one was ever charged, named or officially investigated in any of the lynchings. Many local newspapers, such as the New Albany Weekly Ledger, stated that "Judge Lynch" had spoken.

Our family has been dedicated for 30 years in serving
the Western Horseman the safest most durable Quality
American made leather horse tack.......Buckaroo John Brand
Buckaroo Leather, The Brand to Demand
Visit Our Unique Store Today
Buckaroo Leather Shopping Site
Posted by Unknown at 6:25 PM