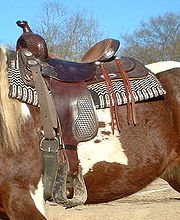 The saddle is the cowboy's/cowgirl's greatest asset. Like a comfy pair of jeans or sneakers, the saddle has been "broken in" to fit not only the rider but the horse. Even in the early west, most cowboys considered their rig their most important possession and by taking excellent care of a well made saddle it could last up to 20 years or more. Over time the saddle was broken in to the riders shape, becoming more comfortable and achieving the "rocking chair fit"....which made it even more valuable considering the hours and days upon end spent sitting on it. This may not have been the case in the early period of the saddle's history, where the saddle was considered more of a tool than an asset.


In 700-800 BCE there is verifiable evidence that the first predecessor to the modern saddle was in use, developed by the Assyrians. It consisted of a simple cloth fastened onto the horse with a surcingle. The Scythians also developed a saddle which included padding and decorative embellishments. These early saddles had neither a solid tree nor stirrups, and provided protection and comfort to the rider, with a slight increase in security.The Sarmatians also used saddles by about 300 BC. They added the breastplate and a girth to help keep the saddle on.


The development of the solid saddle tree was significant; it raised the rider above the horse's back, and distributed the rider's weight on either side of the animal's spine instead of pinpointing pressure at the rider's seat bones, reducing the pounds per square inch carried on any one part of the horse's back, thus greatly increasing the comfort of the horse and prolonging its useful life. The invention of the solid saddle tree also allowed development of the true stirrup as it is known today. Without a solid tree, the rider's weight in the stirrups creates abnormal pressure points and makes the horse's back sore.


One of the earliest solid-treed saddles in the west was the "four horn" design, first used by the Romans as early as the first century BC. This design also did not have stirrups.


The stirrup was one of the milestones in saddle development. The first stirrup-like o 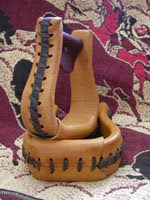 bject was invented in India in the second century BC, and consisted of a simple leather strap in which the rider's toe was placed. It offered very little support, however. The nomadic tribes in northern China are thought to have been the inventors of the modern stirrup. The stirrup appeared to be in widespread use across China by 477 AD. The stirrup then spread to Europe. This invention gave great support for the rider, and was essential in later warfare.

In the Middle Ages the saddle was improved upon due to the fact that the knights needed a saddle that could help hold them in the saddle and support the weight of their heavy armor and weapons. This resulted in a saddle that was built on a wooden tree with both a higher pommel and cantle. This enabled the knight to wear a full suit of armor on his war horse, carry heavy weaponry and it was much harder to knock him off during battle due to the higher pommel and cantle. This saddle was originally padded with wool or horsehair and covered in leather or fabric. If a knight was of rank and had wealth often embellishments would be added to a special saddle which included elaborate leatherwork, precious metals, jewels, fabrics and embroidery.


The American stock saddle evolved from the from the early Spanish war saddle used by the conquistadors. The Mexican vaquero's adapted the original saddle which had a heavy rigid tree, high fork and cantle, deep-dished seat and short stirrups. They made a few minor modif

ications and added a leather skirt. In the late 1700's the Mexican "California" saddle came about and it had a fixed skirt which was round and without jockeys along with a more substantial rigging which consisted of a cinch ring that hung down in line with the front fork and a horizontal strap that ran from the cinch to the back of the tree to secure the saddle. The strong high-peaked pommels of this saddle were ideal for taking a turn around a rope for holding an animal. The Texans then altered the design even more. They liked the basic overall design keeping the wooden tree, horn, cantle and stamped leather but they modified the wooden horn so it was short, thick and covered in leather. The skirt was changed to a plain square skirt and the stirrups were made out of wide steam bent pieces of wood which were much stronger than the carved ones previously used. A second cinch was also added to firmly anchor the saddle as dealing with longhorn cattle were much different than dealing with domesticated ones. In the 1870's they changed the horn again to a short metal one as the wooden ones often broke when dealing with a wild cow.


During this time saddle makers were spread throughout the west and were quite busy making and repairing saddles. Many new designs and innovations came about with the input that they received from their clientele, the ranchers and cowboys. With people moving into the west from the east there were many different styles of saddles seen. Georgia and the Carolinas had "Plantation-style", the "Morgan" came from the east. The "Hope" saddle was used by mountain men, pioneers and early cowboys. The "Cheyenne" saddle was distinguished by it's fancy rolled cantle.


Today, the needs of the working cowboy are no longer the only focus of western saddle design. Saddles are now designed for a wide variety of uses and riders - trail/pleasure, endurance, rodeo contestant, team roper, barrel racer, reiner, cutter, and, of course, working cowboy.Buckaroo Leather offers quality leather horse tack for your saddles . We have horse tack for all your needs, pleasure, trail riding, rodeo and much more.

It's beautiful Horse Saddles for cowboy's and cowgirl's..