Lizzie Johnson Williams was a pioneer women of the old west..a "pioneer" in every sense of the word. She was smart; hardworking, a businesswoman and she loved the finer things!! And she was the first and only woman in Texas history to accompany her own herd of Texas longhorns up the Chisolm Trail.

Elizabeth E. Johnson was born in Missouri in 1843. Lizzie moved to Hays County, Texas where her father started the Johnson Institute in 1852. At sixteen she started to teacher at her fathers school. She moved to teach at other schools in Texas all the while saving her money. She was smart with her money and invested it in stocks. She purchased $2,500 worth of stock in the Evans, Snider, Bewell Cattle Co. of Chicago. She earned 100 percent dividends for three years straight and then sold her stock for $20,000.!!

On June 1, 1871, Lizzie invested her money in cattle and registered her own brand (CY) in the Travis County brand book along with her mark. She was an official cattle woman.

In the summer of 1879, at the age of thirty-six, she married Hezkiah G Williams. Hezkiah was a preacher and widower who had several children. After her marriage, Lizzie continued to teach and invest in cattle. Lizzie was a smart businesswoman, even after her marriage she continued to maintain control over her wealth and cattle business. A progressive thinker, she had her husband sign a paper agreeing that all of her property remained hers. 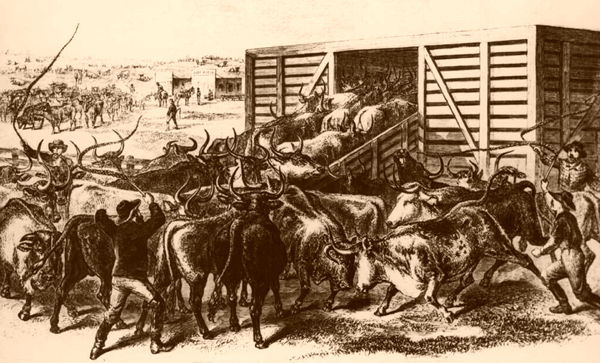 Hezkiah did not have the same "head" for business that his wife possessed. In 1881, on his own, he entered into the cattle business. Along with poor business skills, Hezkiah also liked to drink. Lizzie had to constantly help her husband out of financial trouble.

Lizzie and Hezkiah traveled up the Chisholm Trail to Kansas at least twice. They rode behind the herd in a buggy drawn by a team of horses. For several years she and her husband, after coming up the Chisholm Trail, spent the fall and winter months in St. Louis, where Lizzie made extra money by keeping books for other cattlemen. While in St. Louis, she also liked to "treat" herself to some finer things, like current dress fashions, fine clothes and jewels.

During the Civil War, Lizzie was able to grow her cattle herd by overseeing a process called "brushpopping". Since so many men were away at war and there were few fences to keep the cattle contained, the numbers of "unbranded" cattle in the brush of South Texas began to grow. At that time "unbranded" cattle were fair game- you found them - you kept them. Lizzie had her cowboys comb the thickets for cattle -"brushpopping" round them up and transport them to her growing ranch.

Hezkiah passed away in 1914 in El Paso. It is rumored that Lizzie purchased a $600 top-of-the-line coffin for her husband. When she signed the bill of payment, she wrote across it "I loved this old buzzard this much."

Lizzie eventually became somewhat of a recluse. She lived meagerly, wearing frugal dresses and just living on a diet of soup and crackers. On October 9, 1924 Lizzie Johnson Williams passed away at the age of 81. Her estate totaled $250,000. Family members found thousands of dollars in diamonds locked away in her basement and she had large holdings in Austin real estate.

Lizzie was a true "pioneer" of her time and a great inspiration to women of the old west..and today!

Our family has been dedicated for 30 years in serving the Western Horseman the safest most durable Quality American made leather horse tack....... Buckaroo John Brand
Buckaroo Leather, The Brand to Demand
Visit Our Unique Store Today
Buckaroo Leather Shopping Site
Posted by Unknown at 8:00 AM

Do you know why she named her brand CY or what it stands for?