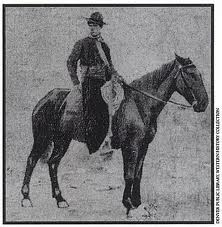 In 1904, the Boise City Capital News reported the death of Jo Monaghan, "a well-known character" who had worked, ranched and ridden roundups in Idaho for more than thirty years.

Deemed like able, if a little odd, by his neighbors, Jo had never given anyone reason to suspect that he was actually a woman. He had even enjoyed such exclusively male privileges as voting and serving on juries.

Jo Monaghan arrived in Owyhee County, Ruby City, Idaho in 1867. This city was Idaho's latest center for the gold rush fever. Jo was only 5ft tall in his cowboy boots. He was slight and and had a high pitched voice. His nick name became "Little Joe". 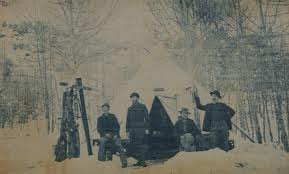 Jo Monaghan lived in Ruby City, in a little shack for 10 years. He tried his skill at mining
(but was unsuccessful) and sheep herding. He also raised chickens and hogs, and made money by keeping a cow and selling the milk to the miners.

He took a job as a sheepherder and spent 3 years, alone with just his horse and dog watching over the sheep. Jo fended off wolves through the long snowy winters.

Jo also worked on cattle drives or wrangling and shearing sheep for local ranchers. He never bathed or bunked with the other cow hands and laid his bedroll outside. He also had no interest in bars and dance halls.
Little Joe had only one close friend, an older mine superintendent. He entrusted him with all his hard earned money for safe keeping. The superintendent disappeared one day with all of Joe's savings, 2 decades worth. Joe and his neighbors formed a posse and chased after the thief, but never found him or the money.

Little Joe was a natural on h 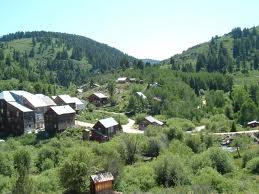 orseback He took to breaking wild horses for a living-he became known throughout the Owyhee's as a superior horseman.

In early 1880's little Joe moved to Rockville, along the Idaho and Oregon border, and started a homestead. 21 citizens lived in Rockville-Joe loved the little city. He was well liked by all there and before long he had a dozen head of his own cattle and horses. 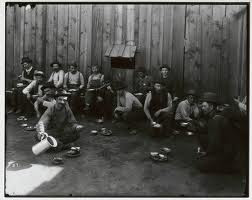 Whaylen's Wild West Show hired Little Joe and featured him as "Cowboy Joe" and offered $25 to any man who could bring in a bronc that Joe could not ride. Little Joe was able to ride any bucking horse with ease and even horses that had thrown all the other local riders.
Whaylen saw an article for Vitagraph Film Co. They touted themselves as the next big thing-"moving pictures". Whaylen wrote to the film co. and suggested they film his Wild West Show.

Albert Smith of Vitagraph eagerly accepted-it would be the first Western movie to be filmed west of the Mississippi. The shows star performance was Cowboy Joe Monaghan. He was filmed on a bucking bronc.

After the Wild West show closed for the season, Joe returned home to his ranch. In 1903 Joe was driving his cattle to pasture near the Boise river, when he took ill. He was taken to the Malloy Ranch for care. He died there on January 1904.


During the burial preparations, Joe's long held secret was revealed. Joe was actually a woman. There was further evidence found in Joe's home. The neighbors were going through Joe's things and found letters written by Joe's sister.

The letters told about a debutante from Buffalo New York, Josephine Monaghan, who had a child out of wedlock. She was disowned by her wealthy family. Her son's name was Laddie. She was a desperate mother trying to make a living by working as a waitress at a restaurant in New York City. Laddie was born in 1866 and her and the child were abandoned by the father. At one point Joe was forced to put, Laddie in an asylum. All this became to much for Josephine (Joe) and she left her child with her sister.

Josephine (Jo) Monaghan's amazing story was made into a movie called "The Ballad of Little Joe".


Information for this story came from the books-
"Cowgirls" by candace savage
"More Than Petticoats:Remarkable Idaho Women" by Lynn E Bragg

Our family has been dedicated for 30 years in serving the
Western Horseman the safest most durable
Quality American made leather horse tack.......Buckaroo John Brand
Buckaroo Leather, The Brand to Demand
Visit Our Unique Store Today
Buckaroo Leather Shopping Site
Posted by Unknown at 2:48 PM