Team roping also known as, heading and heeling, is a rodeo event that features a steer and two mounted riders. The communication and teamwork between the header and the heeler is vital to a successful team. But, if you do not have a properly trained horse or the proper horse tack to allow for good communication to your horse, the team will not be successful.

Team roping is a huge draw in rodeo events. To watch the teamwork and skill between riders and horse is an exciting display of horsemanship of both present day Cowboys and the Cowboys of the Old West.

Below is a description of the Team Roping Event

The first roper is referred to as the "header.” The header is the person who ropes the front of the steer, usually around the horns, then turns the steer so its hind legs can be roped by the second person the "heeler.”

Steers used for roping are moved from a holding corral through a series of narrow runways that lead to the roping arena. The runways allow the steers to be lined up in single file. Then, one at a time, a steer is moved into a chute with spring loaded doors in front and a solid gate behind, so that only one animal is released at a time. On each side of the chute is an area called the box it is big enough to hold a horse and a rider.

The header is on one side (usually the left, for a right-handed header) and the heeler, will start from the box on the other side of the chute. A taut rope, called the barrier, runs in front of the header's box and is fastened to an easily released rope on the neck of the steer of a designated length, used to ensure that the steer gets a head start. An electronic barrier, consisting of an electric eye connected to a timing device, is sometimes used in place of th e barrier rope. When the header is ready, he or she calls for the steer and an assistant pulls a lever, opening the chute doors. The freed steer breaks out running. When the steer reaches the end of the rope, the barrier releases.

The header must rope the steer with one of three legal catches: a clean horn catch around both horns, a neck catch around the neck or a half-head catch around the neck and one horn. The header then takes a dally-a couple of wraps of the rope around the horn of the saddle. Once the header has made the dally, the rider turns the horse, usually to the left, and the ste er will follow, still running. The heeler waits until the header has turned the steer. When he or she has a clear throw, the heeler throws a loop of rope under the running steer's hind legs and catches them. As soon as the heeler also dallies tight, the header turns his or her horse to directly face the steer and heeler. Both horses back up slightly to stretch out the steer's hind legs, immobilizing the animal. As soon as the steer is stretched out, an official waves a flag and the time is taken. The steer is released and trots off.

There is a 5 second penalty for roping only one hind leg and a 10 second penalty for breaking the barrier. Team roping is the only rodeo event where men and women compete equally together in a professionally sanctioned competition, in both single gender and mixed gender teams.

A successful professional-level team takes between 4 and 12 seconds to stretch the steer, depending on the length of the arena. At lower levels, a team may take longer, particularly if the heeler misses the first throw and has to try again. At higher levels, the header and the heeler are allowed only one throw each, if either misses, the team gets no score.

Team roping grew out of the cowboys working on the ranches in the old west. It was necessary to capture and restrain a full-grown animal that was too large to handle by a single man. Larger cattle would have to be immobilized for branding and doctoring by two ropers due to their strength and size. Today, as in the old west, team roping is a timed event that relies on the cooperation and skill of the cowboys and their horses.

Another important aspect to the event is the type of horses used by the ropers. The American quarter horse is the most popular among all timed-event competitors, particularly team ropers. Heading horses generally are taller and heavier because they need the power to turn the steer after it is roped. Heeling horses are quick and agile, enabling them to better follow the steer and react to its moves.

Rope - used to rope the steer. The rope is made of synthetic fibers, or a more traditional cowboy rope is made from rawhide. The Header ropes are 30ft long and are soft. The Heelers ropes are 35ft long and stiffer than the Headers ropes. 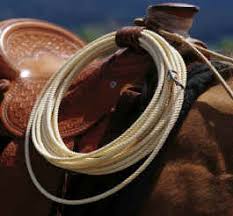 Lariat Rope- (lasso) is a loop of rope that is designed to be thrown around a target and tighten when pulled. It is also a well known tool of the American Cowboy.

Pulling Breast Collar- Pulling breast collars are popular among Western riders, particularly ropers. Instead of crossing a horse's chest from side-to-side like some other styles, pulling breast collars sit just above the line of a horse's shoulders and buckle around the pommel of the saddle. This style of Breast Collar allows the horse more freedom of shoulder movement and better leverage when pulling.

Roping Breast Collar with an over the neck Wither Strap- this will have the best up and over the shoulder fit for a good pulling position for the horse and rider.

Nosebands and Roping Tie Downs-used to help keep the horses head down and out of your line of sight.

Roping gloves- Used to prevent rope burns on the hands of the ride rs.

A Western saddle - a particularly strong design with double rigging and other specialized features, including a rubber wrap around the saddle horn to keep the dally from slipping.

required for the best support.A wider Western Roping Flank Cincha is also best to hold the back of your saddle down when dallied.

Headers swing their loops overhead in a smooth, flat motion, aim for the back of the steer's head and release the loop. When the roper releases, he or she is to stop the hand open, flat, and palm down at the point where the loop is thrown.


Our family has been dedicated for 30 years in serving the
Western Horseman the safest most durable
Quality American made leather horse tack.......Buckaroo John Brand
Buckaroo Leather, The Brand to Demand
Visit Our Unique Store Today
Buckaroo Leather Shopping Site
Posted by Unknown at 4:40 PM