Christmas in the Old West on the Prairie in the 1800s

The difference was seen in the humbleness of the gifts and holiday decorations. Life in the Old West on the prairie was hard and unpredictable. There were often terrible blizzards and cold 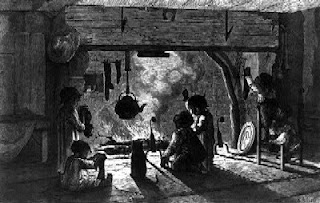 December winds. The Pioneers would not forget the spirit of Christmas though.

The holiday decorations were homemade from whatever natural materials were available, like pine-cones, evergreen, nuts and berries. A Christmas tree was decorated with homemade decorations as well. Homemade figures and dolls made from straw or yarn were used. Yarn, ribbon, berries, popcorn strings, paper stings, and cookie dough ornaments, such as gingerbread men were also used.

Below is an excerpt from the book "Christmas in the Old West A Historical Scrapbook", by Sam Travers.


In the West, probably one of the first Christmas celebrations was held by Lewis and Clark’s Corps of Discovery in the winter of 1805. The expedition had reached the Oregon Coas 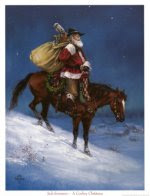 t and was waiting for the warmer spring weather in a small fort they had built. The men celebrated the holiday by firing their rifles and singing. Later, Lewis and Clark gave presents to their men out of the few supplies they had left, handkerchiefs and tobacco. Christmas on the frontier was
sometimes just like any other day. Miles from any big city, fur trappers living in the West were more concerned about surviving the brutal weather than having a party. David Thompson, an explorer and fur trapper wrote in the early 1800’s “Christmas and News Years day came and passed. We could not honor them, the occupations of every day demanded our attentions; and time passed on, employed in hunting for a livelihood.” Most of the mountain men were alone and the holiday was not remarkable in any way, but sometimes the lonely men got together and tried to have some celebration to keep their spirits up. In 1833, one man wrote in his journal at a
Hudson’s Bay Company trading post. “This being Christmas day I gave the men a liberal regale of eatables and drinkables, to make up in some measure for the bad living they have had all year here, and they enjoyed the feast as might be expected men would do who lived solely on soup since they came here. Weather still very cold.”

The tradition of Santa Claus was popular among children on the frontier as well and a journal called “St. Nicholas” was available for children out West. This journal was published from around the early 1800’s to the 1940’s. It was designed for children in isolated areas an

d included 500 pages of stories, poetry, contests, games, and crafts. It was particularly helpful in keeping children entertained during the long winter months on the frontier.

The clever way in which the pioneer families brought holiday celebrations to the West is a sign of their wanting to make a home, no matter where they found that home to be. Making the most of a tough situation, pioneer Catherine Haun wrote in 1849, “Although very tired of tent life many of us spent Thanksgiving and Christmas in our canvas houses. I do not remember ever having had happier holiday times. For Christmas we had grizzly bear steak for which we paid
$2.50, one cabbage for $1.00 and oh horrors, some more dried apples! And for a Christmas present the Sacramento River rose very high and flooded the whole town!”