Not only Popular, but a Celebrity?

The Over the Neck Breast Collar strap is not only popular, but some what of a celebrity. 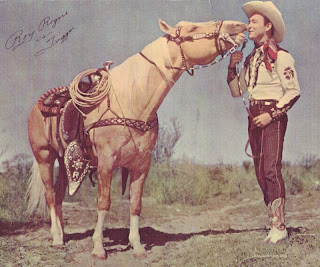 Roy Rogers used this same piece of horse tack on his famous horse, Trigger. In the picture above, you will see one of his amazing saddles, designed by Edward H. Bohlin, with this style of Breast Collar.

Trigger, or Golden Cloud his original name, was born on a ranch in San Diego, Ca in 1932 or 1934. Roy Rogers changed his name for their first movie together, "Under Western Stars" in 1938.


Trigger's first movie role was in "The Adventures of Robin Hood" in 1938. He was the horse of Maid Marian played by actress Olivia de Havilland.

Roy Rogers was truly impressed and enamored by this horse. So in 1943 Rogers purchased Trigger from Hudkins Stables of Hollywood for $2,500. (In 1943 $2,500 was roughly equivalent to $30,000 today.) Rogers paid the $2,500 in payments, as quoted by Rogers "just like you would a bedroom set." He would later say that it was money well spent!Roy Rogers and Smiley Burnett, Roy's sidekick in his first two films, where discussing a name for the horse, when Smiley commented that the big horse was sure "quick on the trigger." Roy decided that would be a good name for him and that is how Trigger got a new name. Smiley was right, Trigger was very fast; in fact he was the fastest horse on the lot. The beautiful golden horse was very athletic and could stop on a dime and give you nine cents change. He could cut and spin so fast that a less experienced rider could be left in mid air and yet his disposition was such that Roy could put three or four kids up on his back at the same time without any worry they would be injured, a remarkable trait for a stallion.

Whenever Roy Rogers was making personal appearances, Roy always placed Trigger and his fancy horse trailer outside of the arena or building where they were appearing before the show. He wanted all the kids to be able to see Trigger, especially the ones that couldn't afford to buy a ticket.

As mentioned before, Trigger's finest saddles were made by Edward H. Bohlin, known as the Michelangelo of saddle making. Mr. Bohlin got his start as a famous saddle maker by making horse tack for Tony, the famous movie horse of cowboy actor Tom Mix. Many of Trigger's saddles were covered in intricate patterns in silver and gold, and some of them weighed as much as 150 pounds.

Several of these amazing saddles are on display in the Roy Rogers museum in Branson Missouri. Roy Rogers' beautiful Bohlin silver saddles and his unique plastic saddles are on display. Roy's trademark Bohlin silver saddle first showed up on screen in 1942. In the Bohlin catalog of that era it is listed as the Dick Dickson, Jr. model. It is a beautiful black hand carved saddle with silver triangles and diamonds. Roy used that saddle throughout his career and it is now displayed on Trigger in the museum.

Along with his Bohlin saddles, Roy also purchased the Music saddle. It is one of the most elaborate saddles ever made. It was created in the early 1930's for a lady named Mrs. Music and she rode this saddle in the annual Rose Parade and other events for a number of years. She was a small lady and this saddle has a very small seat. It took 16 men almost a year to produce this saddle set that originally sold for $20,000 and reportedly contained 1,400 ounces of sterling silver, 136 ounces of gold and hundreds of Czech rubies. Roy bought the items from the original owner's estate in 1950 for $50,000.

Trigger passed away peacefully in 1965. Assuming he was born in 1932, he would have been 33 years old at the time of his death. When Trigger died his hide was mounted over a plaster cast of a rearing horse. It now located at the Roy Rogers Museum in Missouri

Thank you for such a nostalgic trip.
Hope your reader visit my Blog
www.equine-barnyard.blogspot.com

and our
Squidoo Lens

Wow! I did not know Trigger never sired a foal. The pictures and information you provided "this is tack here, this is tack now year" was informative.

Cool blog you got here. It would be great to read something more about this theme. Thanx for sharing that information.
Sexy Lady
Escort in London

That saddle in the picture look amazing , beautiful .i also wanted to have saddle with good quality ,so i thought to take help of classified sites like Free horse classifieds, which can provide information about the product.